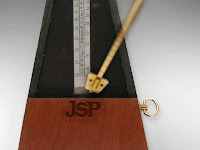 Never Black or White. Never Fast or Slow. But always somewhere in the middle—

I’m pretty good at fence sitting. Maybe it’s from all of those years of literally sitting on fences… Or, maybe with the contradictions that life produces, and all the different opinions I respect in the world, I just want to see people happy. Either way…All hail Switzerland!

In the game of Tennis, the part of the court located between the base line (the white line at the back of the court) and the service line (the white line half way up the court) is often referred to as “No Man’s Land.” Novice players often find themselves vacationing in “No Man’s Land” under a false sense of security due to the area's total lack of commitment. You’re too far back to be playing at the net, and you’re too far forward to be playing at the base line. In theory, you should be ready for anything.

The problem is, however, that when you’re neither here nor there, you play neither offense nor defense, and in turn, forfeit all strategy to win. Still, if you’re looking for a comfy place to merrily skip around and chase yellow balls, “No Man’s Land” is your place!

In celebration of my ability, or disability, to find a neutral “No Man’s Land” in virtually every aspect of my life, I would like to delve into another realm of ambiguity. It’s a place where nothing happens, and yet enough happens to incite laughter, tears, and yes, even bed-wetting. It’s the “No Man’s Land” between dead and awake. Ladies and gentlemen, I give you the Land of Dreams!

I think I can safely say we have all had a dream or two in our lifetimes of slumber. We may not remember them, of course, but we all dream. Our subconscious dreamlands are like an elaborate buffet of insecurities, hopes, and fears, all served up in a trippy, opium den of thought. So, in no particular order, I would like to take you on a tour through some of the most memorable JSP dreamscapes. They range from silly to horrific, from poignant to jarring. What they refuse to be, however, is boring.

What I Remember: In somehow keeping with the previously established tennis theme, I dreamed that I was interviewing tennis superstar sisters Venus and Serena Williams. It was a casual chat, and I brought up the fact that they hail from a Jehovah's Witness upbringing in California. I knew this because Venus had been featured in a book I had growing up of famous young athletes.

Anyway, when I addressed this, they stopped to correct me. I was wrong, they said. They were not from California, but from the South American nation of Chile. Hmmm. My bad.

The Interpretation: The Williams Sisters are not from South America! I had to re-convince myself of this when I woke up the next morning. So why Chile? The only connection I have to that place is my father, who served his LDS Mission in Santiago. He also liked tennis… Maybe I somehow connected the famed proselyting of the Williams sisters’ J-dub upbringing with the LDS missionary efforts of my own father? That would mean that, in this dream, the Williams sisters were my dad… Nah—I don’t buy that. My father was not African American, nor did he have thighs that could out squeeze a boa constrictor.

What I Remember: This dream was neither linear nor mosaic. It just…was. I remember that I was in a dimly lit motel room. There were two queen beds topped with tacky comforters of the paisley kind. I was seated on one of them, with my legs crossed “Native American style.” Sitting across from me on the other bed was Meryl Streep. Of course—

Meryl and I were catching up. It wasn’t anything big, you know, just two old friends enjoying time together. During our chat, I suddenly became aware that an actual friend of mine was huddled in the corner of the room, kind of where you’d imagine the air conditioning unit to be. All of a sudden, that friend perked up and yelled, “ALPACAS!”

The Interpretation: After telling my friend of her supporting role in “Motel 6 & Meryl Streep,” she did some research and told me that the presence of llamas in your dreams symbolizes great trust and strength…OR that you’re carrying around too many problems on your back. Personally, I’m just happy my subconscious scripted the scene with the word “alpacas.” It is a much funnier word than “llamas.” Which, now that I think of it, where do llamas live? In Chile! What is going on!!?

What I Remember: You know those dreams when you find yourself sprinting away from a deranged maniac who is only walking and yet somehow manages to keep up with you? This dream was a variation on that one. I was back home and heard a knock at the door. I answered it, and by some means, immediately realized that the person standing there had come to take away my two little sisters. I then spent what seemed like an eternity of panic trying to shut the door in time.

The Interpretation: Nothing clever or quippy about this one, folks! This was a good, old-fashioned nightmare, obviously playing off of the pressure I put upon myself to take care of my family. Yay, fun.

The Dream: Every actor has had the dream of getting on stage and not knowing his or her lines. In my dream, however, I showed up to the theatre, and was told I had to do the musical, Cats. I’ve never done Cats!

The Interpretation: Well, isn’t it obvious? This dream proves once and for all that despite what I actually think, my inner kitty wants to get on a stage and sing “Memory.” Very, very loudly.

Thus concludes our tour of my subconscious; I hope you're feeling rested…Now wake up!

You know, it seems we live in a society that is increasingly fascinated by labels. There is a growing obsession to diagnose things. If you’re not this, then you must be that. If you’re not with us, then you’re against us. And yet, in the face of that kind of presentation, I find myself simply thinking, “Why can’t I just be me?” Maybe that is what living in “No Man’s Land” is all about.

As I see it, whether you’re asleep or awake, every “No Man’s Land” tends to hold more questions than answers. There's little strategy. It requires constant readjusting. You’re always looking to either side, continuously aiming towards the middle. It’s a balancing act, really. Living in “No Man’s Land” requires a lot of patience, and sometimes, a lot of silence.

But, hey, it’s also a great place to dream.