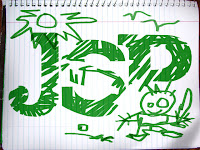 A few years ago, I was browsing through one of my old journals, and became sorely unimpressed by its insipid optimism. I seemed really bland!

While I usually prefer a healthy dose of optimism to accompany my sassy Caucasian commentaries, I must admit that in this case, I was thoroughly bored by the never-ending pages of sunshine. There were no details. No names, no emotions, just watered down descriptions that kept everything in a nice, even light. It was like a year long cheerleading routine without any gymnastics, or a symphonic fantasia filled with just one note.

This glossy coat of positivity was probably an extraordinary accomplishment at the time. Ten years later, however, it was an abysmal failure as I had nothing to remind me of what actually happened!

At first, I didn’t want to bother with chronology, so I left random pages blank. Somehow my life felt more organic if it was presented out of order. But as my type of personality often does, I started to plan. Without even being aware of it, I began assigning expectations to the blank pages of possibility. I decided one page would eventually have something funny on it, while another page would be really colorful, and so on…

There was one page, in particular, that I vowed would be truly important. Every time I felt inspired to write, I would look at that empty space, and eventually convince myself that it wasn’t quite time to fill it. It had to be special!

Finally, after about six months, I took a long, hard look at the now holy piece of parchment, and thought, “What am I waiting for!?”

“Why would any one moment ever be any more precious than the present? Why shouldn’t the newest moment I’ve received also be the most profound?”

Inspired by my new philosophizing, I grabbed a pen and went to work. I drew a little stick figure with a big smile and squiggly hair. Then, I drew his stick house and a stick tree with a stick sun shining down on it all.

I looked at my newly filled page, and felt content with its significance. By way of a rather long and unexpected gestational period, it was exactly what I wanted. Then, I added one more thing at the top of the page. In bold letters I wrote,