Tony Night: the Holy of Holies 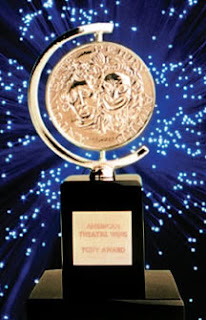 Let me take you back to a time before WiFi, before Amazon, before YouTube, before pretty much every saving grace that currently satisfies the needs of theatre nerds everywhere...

It was the year I discovered the conduit through which I could travel beyond my small town realities and bask in the light of my Broadway musical dreams...

It was the Tony Awards.

Now I had no idea what the Tony Awards were, but I casually found it, tuned in and ended up nearly wetting myself.  There, on my downstairs television, was actual live footage of that year's Best Musical nominee Beauty and the Beast.  I was floored.  Up until that point, the Broadway production of Beauty and the Beast was something that only existed on the Original Cast Album that my parents bought for me at the Disney Store two hours away.

You can understand my frustration, then, when that evening the Best Musical award went to Stephen Sondheim's Passion, a show I was highly unimpressed with because of the two nudey-patooties they showed singing in a bed.  As far as my pre pubescent self was concerned, they were using sex to buy a Tony Award, and I wasn't falling for it!  (Cut to a decade later when I wrote an entire college paper at BYU dedicated to loving that show, but I digress...)

The only other things I remember from that first Tonys viewing were a redhead from the revival of Damn Yankees belting out "Shoeless Joe from Hannibal MO," and the look on my father's face when I correctly predicted that Diana Rigg would win for portraying the title role in Medea.  Said the young JSP: "Come on Dad.  I mean, it's Medea."

Thus began the creation of my most important Sunday of the year besides Easter.  And even then, Tony Night is basically a religious experience, so I never felt bad.

Every year I instructed my family not to interrupt me during the Tonys because I had to record it on the VCR with controller in hand to avoid commercial breaks.  This was essential to the Tony viewing process since I'd be re-watching the broadcast countless times before the following year.

This continued even when I was serving as an LDS missionary.  My mom stepped in and vicariously watched the show for me in 2001 and 2002 since I was not able to watch them myself.  She not only recorded them, but took copious notes on their proceedings and sent them to me in far away west Texas.

And now today I still watch the Tony Awards.  I admit it's a little different, and that's ok.  I have opinions now.  I've worked with some of the people nominated or performing, and I get more excited for them than I do for myself.  In general, I don't care nearly as much about awards anymore, but I do love celebrating Theatre.  Tony Night continues to be one of the only opportunities America gets to view one of the great traditions that we have as a nation: Musical Theatre... also known as the best two words in the English language. (That's right Julian Marsh, I'm talking to you.)

So from a true theatre nerd to all those out there that might feel the same, Happy Tony Night!